How Can You Be Borne Up, If You Won’t Let Go? Spiritual Experience Is Distorted by One’s Birth Trauma … The Necessary Hero Descends Into the Perinatal Below 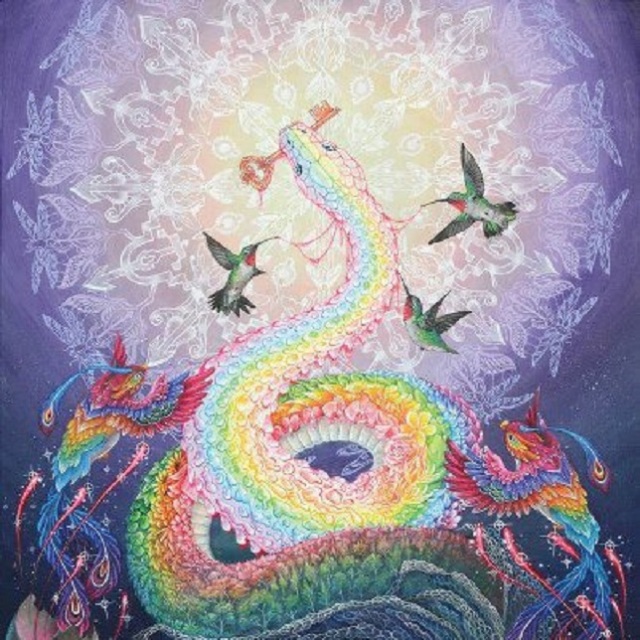 When Everything Appears to Be Conspiring Against You, You Might Want to Stop Fighting Rebirth: Atman Projects Versus Surrender Solutions and a Different Hero’s Journey 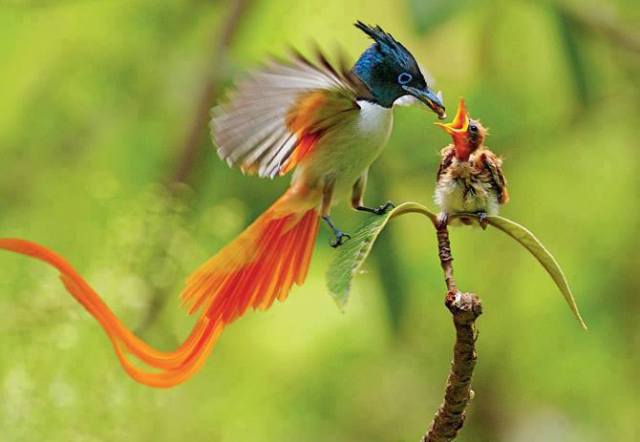 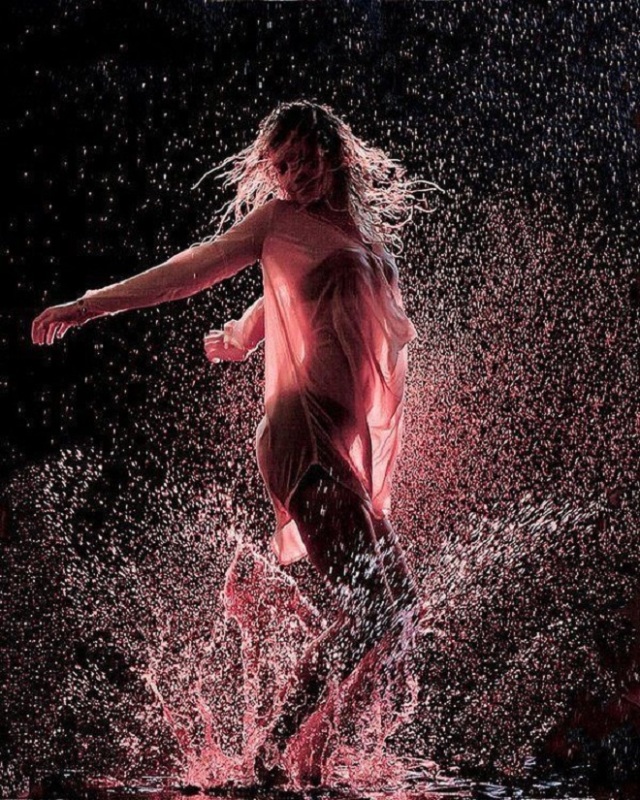 The Necessary Hero and Descent Into the Underground–When There’s “Nothing But Trouble,” You Know You’re in The Perinatal Below

A Different Kind of Hero’s Journey for Our Times Is Depicted in the Cult Classic, “Nothing But Trouble” 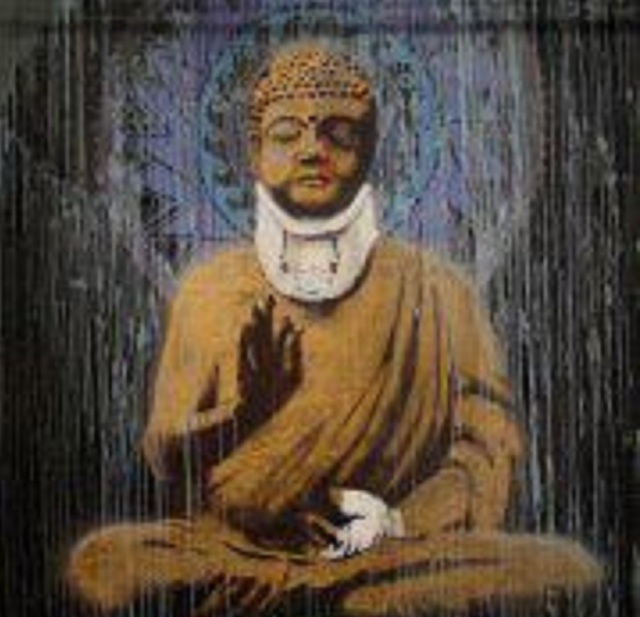 A film of postmodern times that is bold with revelation for us is the cult classic, “Nothing but Trouble,” which was released in 1991.

It is an especially potent example of the rising pre- and perinatal influence in the media we’ve been discussing as well as the different heroic response required in these strangest of days because of it. It is all this, plus a twist: As a comedy it represents an unlikely approach to such material and themes. More about that later.

It was produced and written by Peter and Dan Aykroyd and stars Dan Aykroyd, Chevy Chase, Demi Moore, and John Candy. 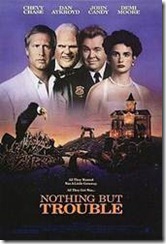 Its reception by modern audiences mirrors exactly the perception in general, to date, that has been had of the perinatal material it depicts so well. For despite the movie’s star power and the popularity of its co-creator,

Dan Aykroyd, it was met with overwhelmingly negative reviews and received six Razzie nominations, garnering one. I fully expect that until we know better I can expect much the same kind of reaction to this book, because of the perinatal perspective it is revealing of the dark underside of everyday pleasantries and sugar-coated media realities. Yet there is hope for all that we will integrate this hard-to-face yet redemptive material in the fact that the movie does have a strong following among some in our population, just as at present there are some who are not in denial of the bittersweet perinatal vision being revealed.

The Lure Into the Underworld and Call to Adventure

The perinatal adventure of “Nothing but Trouble” begins innocuously with the main characters “leaving the beaten path” on a rather ordinary trip out of the city. Interestingly, the Brazilian couple who have forced themselves on the main characters of Chevy Chase and Demi Moore in making the trip act as impish other-worldly instruments in the change of route.

Joseph Campbell pointed out that the “call to adventure,” which marks the beginning of the descent into the transformative nether regions, may be instigated by the merest chance or blunder. [Footnote 1]

Campbell also writes that the heralds of such a rite of spiritual passage are often loathly and underestimated characters. The Brazilian couple—as gaudy, overbearing, quirky, and from “down under”—perform just this function of luring into the underworld. Thus, they remind us that it is the quirky yet underestimated element in our familiar daily experience that opens us up to the process whose ramifications are huge by comparison.

The Merest Blunder, The Adventure Begins

Sure enough, this innocent-appearing outing is soon disturbed. The merest blunder of map reading results in an ominous tour of an eerie town and its somber and menacing-looking inhabitants. This is followed by a high-speed car chase as the police attempt to pull the innocents over for a bogus traffic violation.

In the tour of the town, it is as if the ego is shown getting a preview or having a precognition of what lies ahead and attempts to flee back into its safe familiar environs.

But of course, this emerging piece of unconscious material will not be denied and is able to capture the fleeing ego that we see safely ensconced in its trappings of status and power—symbolized by the BMW with car phone. At this point the main characters, representing the ego, are led, under guard, into the bizarre town of Valkenvania—the encounter with unconscious perinatal begins. 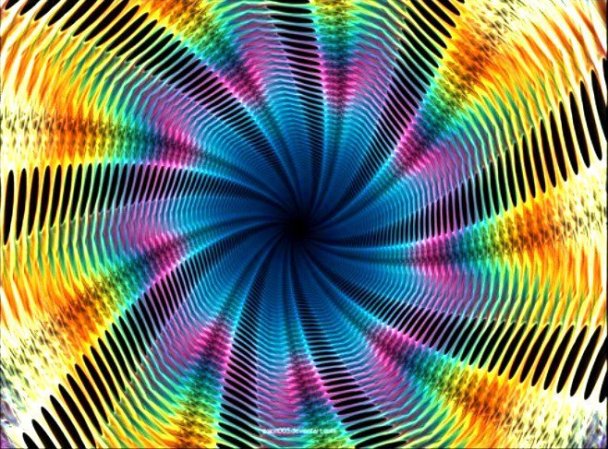 The Junkyard of the Psyche

Campbell says that in the unconscious deep, to which one is beckoned, “are hoarded all the rejected, unadmitted, unrecognized, unknown, or undeveloped factors, laws, and elements of existence.” [Footnote 2]

Likewise, the set in “Nothing But Trouble” is replete with refuse. Bits of history—of rusted and broken refrigerators, automobiles, kitchen appliances, assorted junk, and pieces and parts of all the preceding…the wreckage of the past—are strewn about as well as heaped in clusters to construct the architecture and delineate the outlines of the drama. The correlation with subconscious remnants of forgotten memories and past emotional experiences is obvious.

Thus the drama evolves in the dumping ground and junkyard of the psyche—where all the rejected tidbits of experience have been relegated.

After being separated from the automobile—that is to say, the ego stripped of defensive trappings of status and worldly position—the characters are rather quickly shuttled into encounters with a myriad of perinatal elements. A few of the obvious ones are as follows:

The most obviously perinatal element, however, is the gargantuan and grotesquely flabby infant twins in diapers. Perinatal feelings are indicated in their extreme crying neediness.

Their freshly newborn quality is evident in their fleshiness, which reminds one of the overweight appearance of some newborns, which is usually lost a little later on in infancy. The glossy, waxy sheen on their bodies is reminiscent of the skin of a newborn, which, fresh out of the womb, is wet and slippery, covered in amniotic fluid and cervical mucosa. 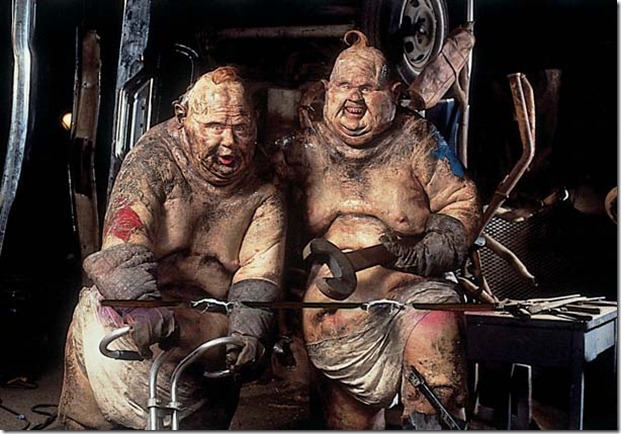 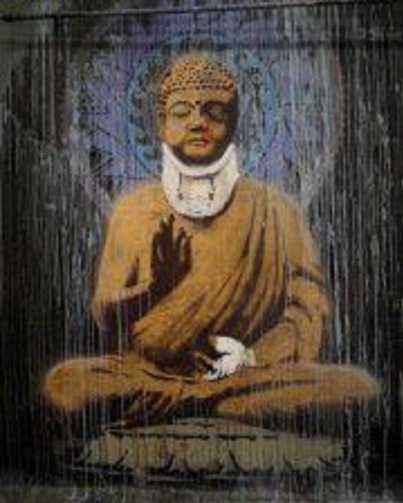 An interesting aspect that indicates the transpersonal, or spiritual, interface with the perinatal is an attic room—a higher mind of memory, kind of like an Akashic record—where all past IDs—identifications—and reports of them—newspaper clippings—are displayed.

Though, interestingly enough, in true perinatal fashion, a macabre lens is used to view these lives—only the reports of their tragic disappearances are seen. I believe that this is a wonderful depiction of how transpersonal information is distorted by perinatal material—the implications of which are far reaching for the pronouncements of so-called spiritual, or psychological, authorities who have not dealt with their perinatal undersides.

Trusting Higher Forces: Say “Good Night,” John Wayne, and How Can You Be Borne Up If You Won’t Let Go? When All Seems Lost…. You Might Want to Stop Fighting Rebirth 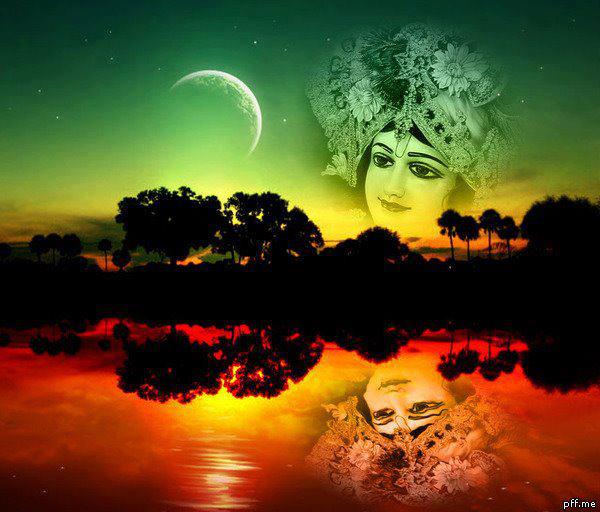 When It Appears the Whole World Has Been Conspiring Against You, You Might Want to Let Yourself Be Blessed 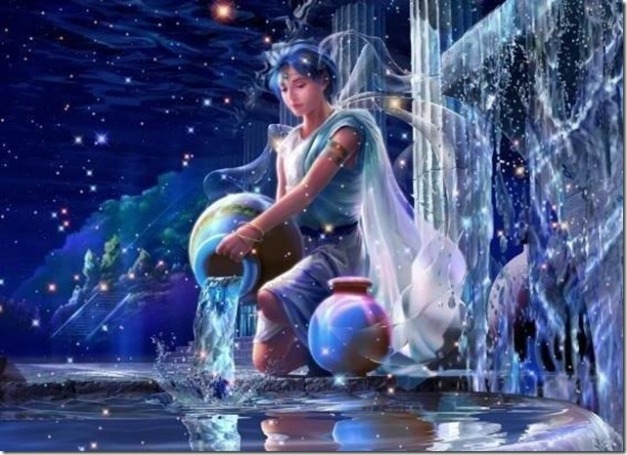 Just When You Thought….

However an important element in this movie, “Nothing But Trouble,” which is different from artistic representations that deal with only the personal or psychodynamic, is the way the ending opens up under it to a new level, a whole new arena, of issues. Those of us in experiential therapies or breathwork are only too aware of how the perinatal opens up to one, revealing a greater expanse and pervasiveness of dis-ease, at a certain point after dealing with the personal and the psychodynamic. 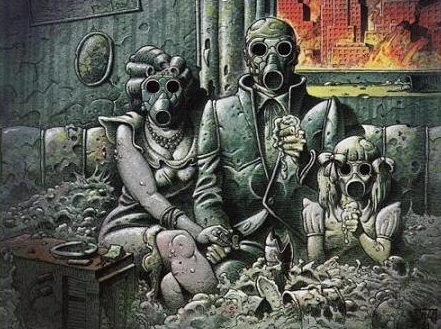 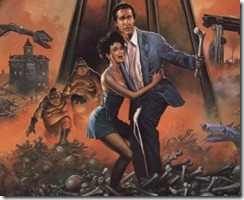 This layered, or multilevel quality of the movie is shown when the main characters, having heroically escaped through personal effort, find themselves returning to the perinatal realm. Thinking that they have the forces of authority and light on their side, they expect this time to be able to put the evil away once and for all. 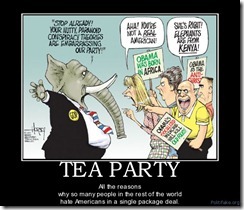 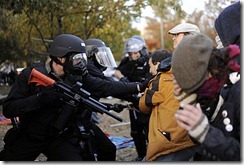 But When All Seems Lost….

To their immense surprise, it appears that the whole world has been conspiring against them—a telling perinatal feeling. The evil is discovered to be pervasive, as if infiltrating every corner of the universe—another perinatal feeling. Even the thoroughly trusted elements of light

turn out to be on the side of the darker forces—a vantage point that is part of the hopelessness that characterizes the classic no-exit BPM II scenario. And just like in the womb, then, when all seems lost, something new happens, an explosion or eruption of sorts, which brings down the old world and its structures in a violent conflagration. 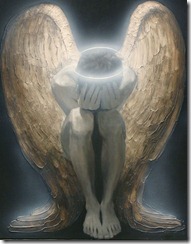 This hopeless and futile aspect of the perinatal realms — as opposed to the merely personal or psychodynamic ones—lends itself to its distinctive response—which is surrender, not resistance. Unlike the hero of Campbell’s hero’s cycle whose task is to slay the dragon using the sword of analytical or cognitive powers, the correct solution here at the perinatal is to let go of all designs, manipulations, and attempts at control and to put oneself into the hands of the seemingly irrational and chaotic Universe, come what may. 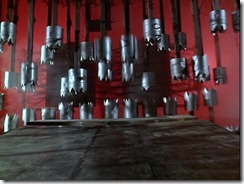 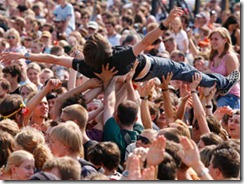 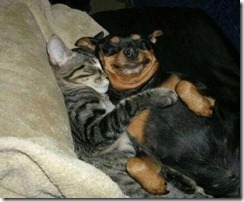 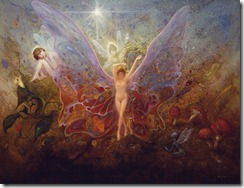 How Can You Be Borne Up, If You Won’t Let Go? 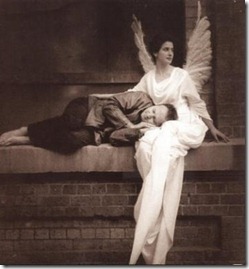 The Universe’s response in the movie — the upsurge of fire from below the earth that brings down the evil structures—demonstrates the theme of being saved by higher forces when one finally is able to surrender. In the same way, in our perinatal experiences, we find ourselves “borne up” and elevated when we once are able to submit to the upsurge of fear-evoking perinatal emotion. 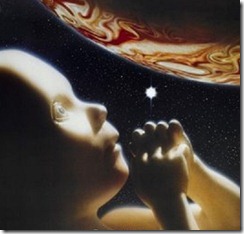 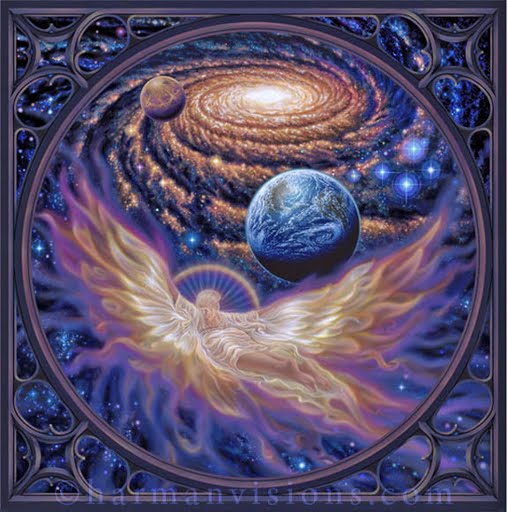 Indeed, when Chevy Chase is seen rolling and setting fire to barrels of oil in a superhuman nick-of-time rescue attempt—in typical “hero’s journey” style—I had an odd disjointed sense that we had switched modes. The element seemed incongruous.

But, then again, not so. For the movie shows that the successful escape performed through one’s own effort is, in actuality, futile.

In perinatal terms, such heroics are illusory “atman projects” that ultimately fail against the onslaught of perinatal material, which must be surrendered to, not heroically resisted or conquered.

Interestingly, the eventual surrender solution is echoed earlier on when Chevy Chase is about to go through the chomping jaws of Mr. Bonestripper, the devouring womb. His response, at the prospect of his imminent failure, is to pray—to call on higher forces.

Amazingly, the machine breaks at that moment, signaling the response of such “external” or higher forces. He alone, of all the others who have faced that fate, goes through the machine unscathed.

Notice also that he says “Thank you, Lord” afterwards. 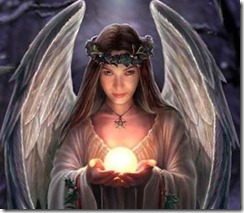 perinatal material, rather it is by the relinquishing of such attempts at control and 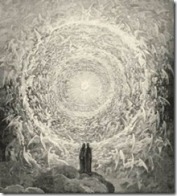 the relying and trusting in higher forces. We are reminded that Dante required the angelic Beatrice to show the way through purgatorio and inferno to paradisio. 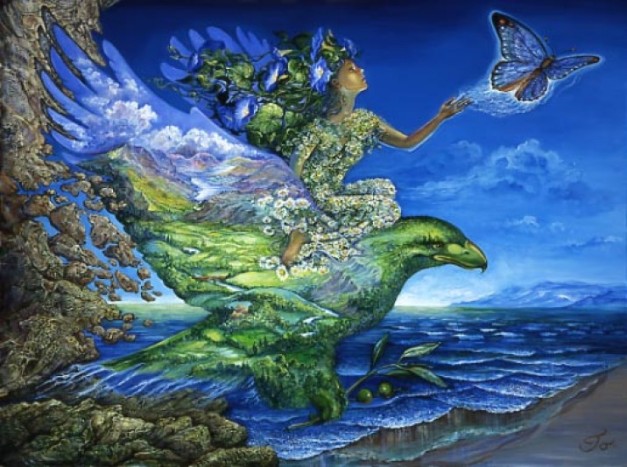 In the next chapter, we will use another postmodern film to expand on these themes. This will allow us to fill out an emerging pattern, as we then compare it with “Nothing But Trouble” and other perinatal evidence.

So let us watch, now, as the pattern, like a photo emerging in solution, reveals to us its features, thus delivering to us the message it has come to bring. 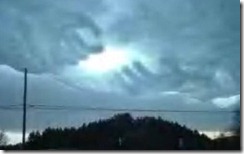 3. As a reminder, BPM III events (Basic Perinatal Matrix III events), using the typology set forth by Stanislav Grof in his many works, are the events surrounding the actual birth struggle of the infant during delivery. These parts on the perinatal in film make mention also of BPM II, which is related to the time of severe compression and constriction of the fetus in the latter stages of pregnancy and prior to the actual onset of delivery—which are characterized by feelings of “no-exit”; of BPM IV, which is concerned with the feelings of release, triumph, being saved, and whatever else occurs immediately after delivery; and of BPM I, which is related to the state of the fetus earlier in pregnancy—prior to compression—which is often conceived to have “oceanic” and “blissful” qualities, though not always.

Return to Apocalypse – No! Chapter Eleven: Control Versus Surrender … Heaven Leads Through Hell

To Read the Entire Book … free, on-line … of which this is one chapter, Go to Apocalypse No: Apocalypse or Earth Rebirth