Apocalypse – No! Chapter Fourteen:
To Move the World – A Race Against Time 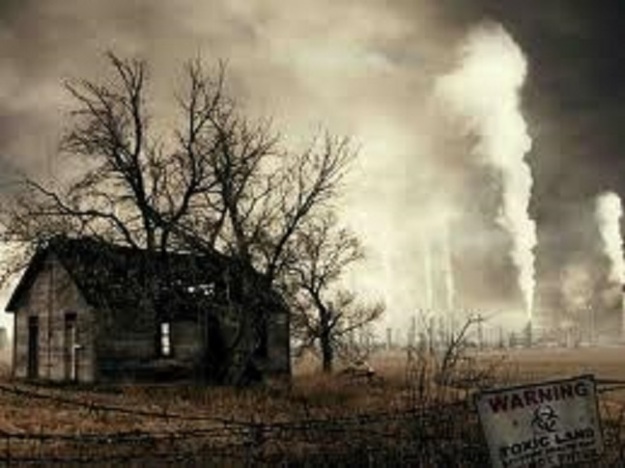 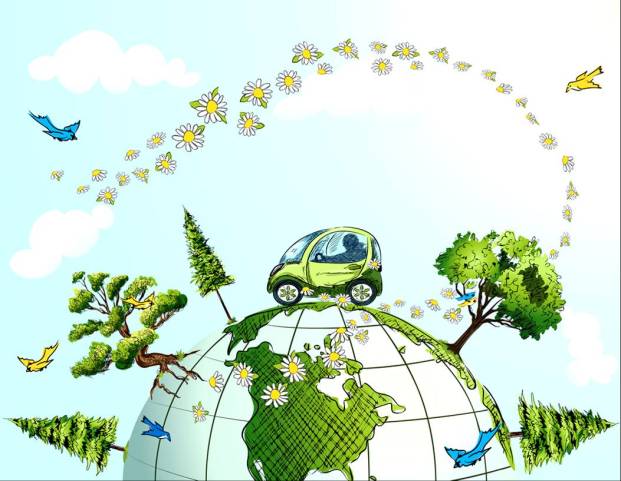 Apocalypse? Or Earth Rebirth? A Smaller Number of Us — Standing in the Right Place and With a Lever Big Enough — Might Be All That Is Needed to Move the World 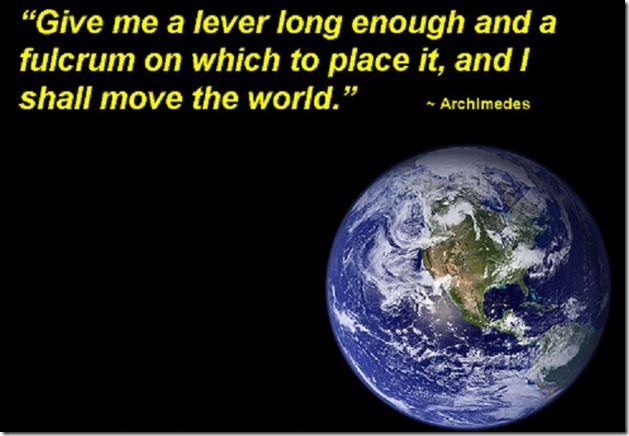 A Smaller Number of Us Can Make All the Difference in the World, Literally, by Tipping Our Course One Way as Opposed to Another: Moving the World – A Race Against Time 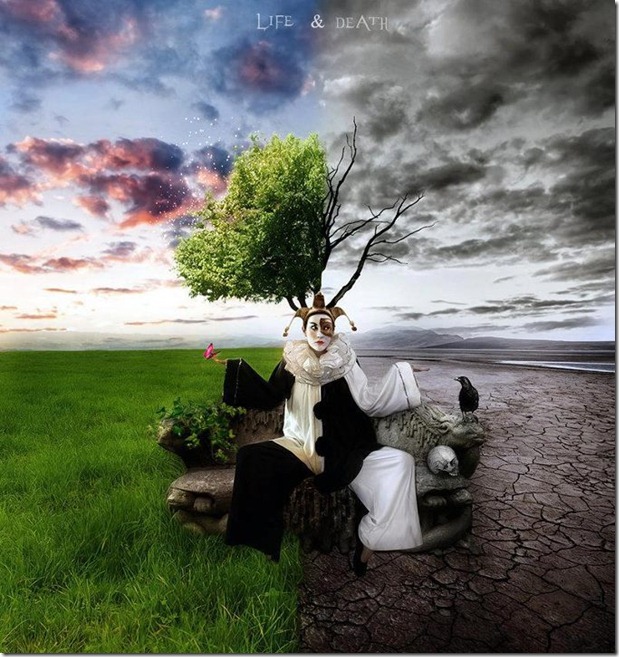 The Evidence for Change Occurring

Finally it is time to answer the question posed by this book: Apocalypse? Or Earth rebirth? Knowing apocalypse, we can now declare a hearty No! to apocalypse. 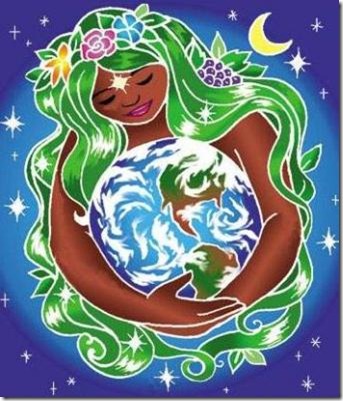 Our answer begins by pointing out that we have discovered, in this book, that there are things that can be done to prevent our extinction and, on the contrary, bring in a new dawn of harmonious cooperation with the forces of Nature. In the last five chapters we have seen that there is evidence of a collective change in consciousness occurring. A radical change in our attitudes to war, racism, the environment, and even spirituality—and thus to the very way we live our lives—is manifesting in our culture, the youth of the world, our children, and is even popping up in our collective dreams. 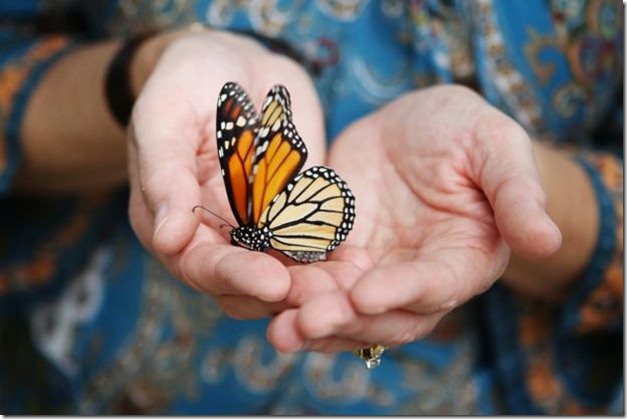 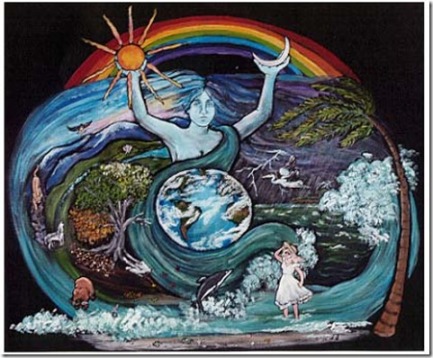 In addition we are aided by some fundamental processes of natural and cosmic law. In preceding chapters I have pointed out how both our nature inside and Nature outside seem to be conspiring to force us into the changes necessary. From this perspective we are in the hands of natural law, and its homeostatic mechanisms may bring us into line in ways unimaginable, beyond even the speculations I put forth in our attempt to see “through Gaia’s’ eyes” in Chapter Seven. 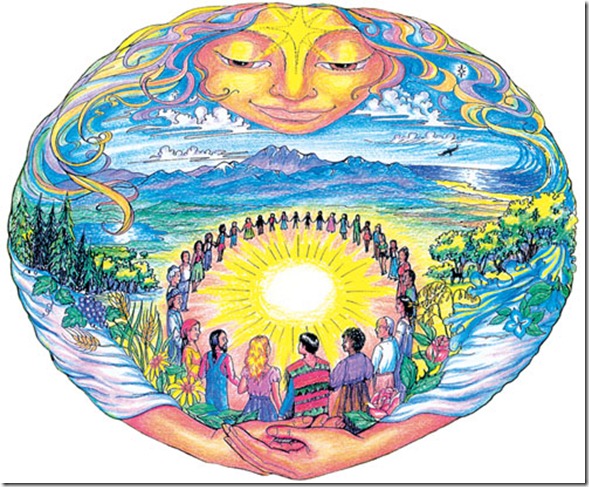 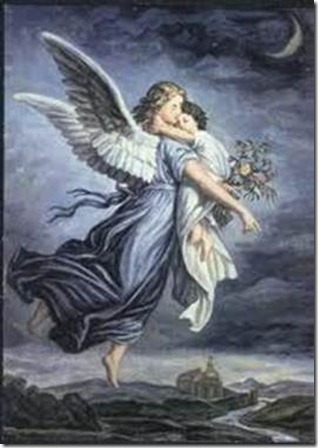 Furthermore we may be aided by unseen forces and entities of which we know not and may be incapable of knowing. Though I think it foolhardy to sit on our hands and hope that some intergalactic or spiritual cavalry will arrive to save the day at the last moment. Still it is eminently reasonable, considering the minuscule knowledge we have in relation to the immensity of All That Is, to put aside our familiar hubris and at least consider the possibility of aid from higher forces or entities.

Indeed, there are many people in this day and age who believe that particular forces have come together at just this juncture in time to aid us and to ensure our success. 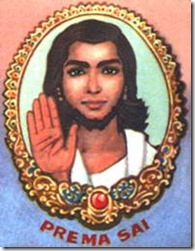 Perhaps it is because our interconnectedness with Everything requires that we not fail, for it would have detrimental effects on things of which we do not know. I must confess that I myself have received knowledge of such help being given us. [Footnote 1]

Similarly there are others who believe that God will not allow His/Her creation to be destroyed and did indeed come in the flesh to ensure its success. [Footnote 2] 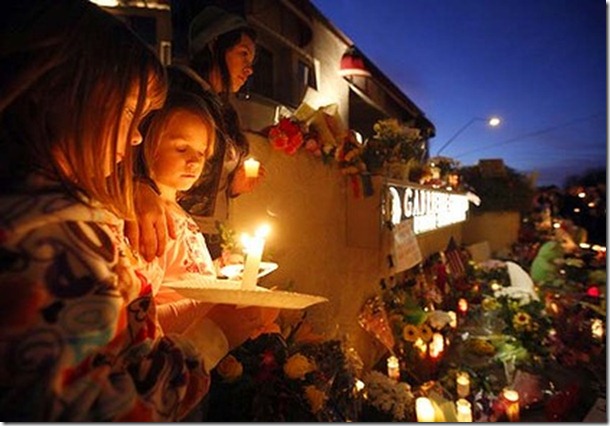 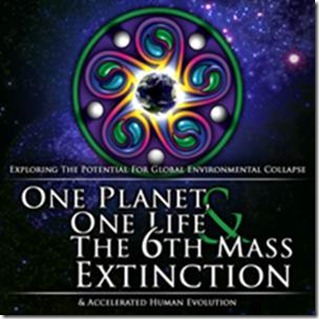 And there may even be cosmic laws at work. “Truth has its own momentum,” said one of our workshop participants. My wife and I conducted workshops in what we call primal breathwork, which is based on the Holotropic Breathwork™ of Stanislav Grof. In these workshops, which involve access to all aspects of the unconscious, including the spiritual/transpersonal, the biographical-psychodynamic, and the sensory, as well as the perinatal, it is not unusual for us to witness people being motivated, because of their profound transformative experiences, to commit themselves with all their being, talents, and resources, to aid in the processes of renewal on this planet. 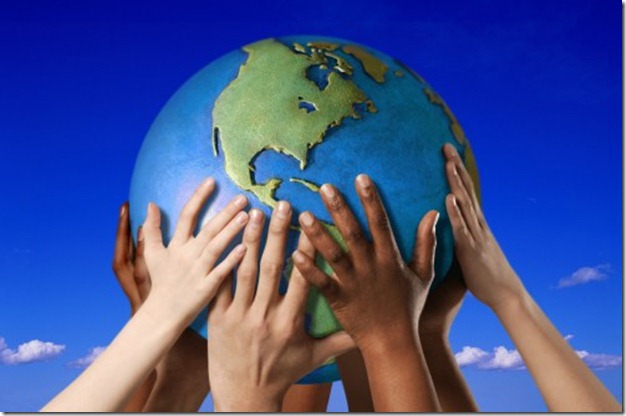 But Is It Enough?

Don’t Expect to See It on Cable News 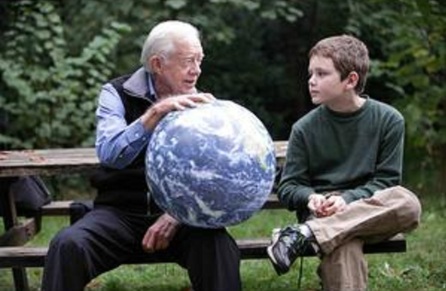 But some might argue that there are not enough people changing. You might easily get that impression if your prime source of information is the mainstream media of the cultures of the world. For it is in the interest of the dominant media of all lands to support the status quo—for economic, as well as political reasons. They are not likely to report the new and controversial. 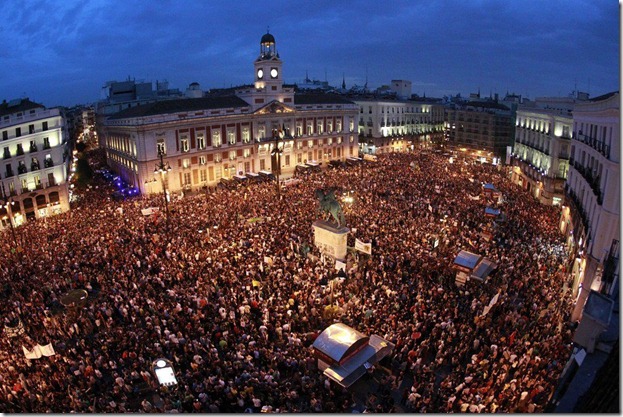 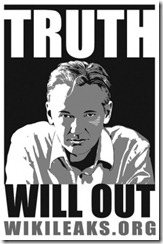 In fact, the proof of this is that when truth is truly democratized and shared freely, as on the Internet, the information that comes out is drastically different from the sanctioned news sources. Indeed, we have seen the social media and the Internet leading in many areas, from Wikileaks to Mideast revolt, everywhere and anywhere. Like a tail wagging a dog, the Internet has been the first to expose information that the controlled media, who knew of it but repressed the information, only afterwards were forced to present.

So don’t expect the paid-for media to give you an accurate portrayal of what is truly new and breaking or for them to accurately reflect cultural changes as they occur. And don’t either expect for them to present the news of positive developments occurring—especially when those positive developments threaten an entrenched status quo. No, the official information sources of the status quo are the last to report such changes, and they do so only when they absolutely have to. 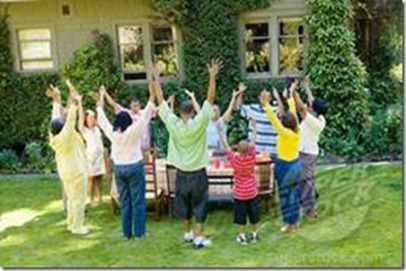 Meanwhile, from my vantage point, I would answer the query that there are not enough people changing by reiterating that, in fact, there are many of us who are integrating this emergent material, who are regaining our truth and the truths of this Earth and the Universe, who are expanding our consciousness to include this information, and who are carrying that information forward into positive action to heal ourselves, the people around us, humanity at large, and the planet. 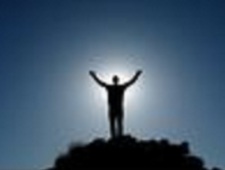 This response of constructive action is exquisitely expressed when the peace symbol is reversed and symbolizes a human figure with arms upstretched—meaning the expression into the external world of what was discovered within. 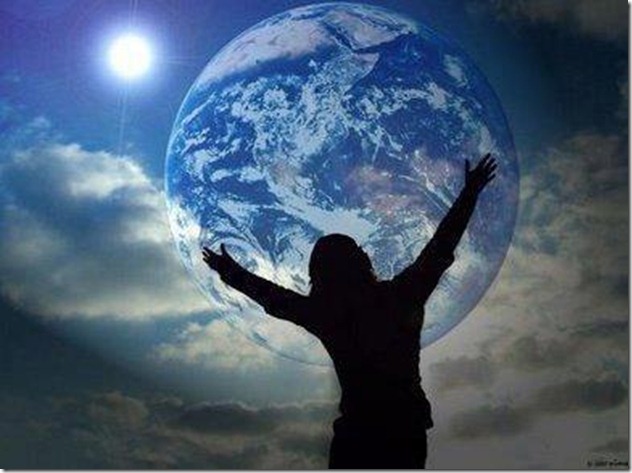 Putting Out Our Hand By Creating Healthy Alternatives

An answer to the question of what will happen is that we can hope that the forces of integration are more successful than those of disintegration and reaction in the face of this influx of material, for one thing. In addition, those of us who are dealing positively with these emergent truths can help to build societal structures and processes that make it easier for others less fortunate to face and deal positively with their

Those of us who can should put out our hand to our struggling sisters and brothers. If we can set up and provide accessible alternatives to the ones of reaction and acting out that now exist, we’re going to make it more likely that those more prone to reaction and avoidance will instead also grow in response to these eco-apocalyptic, bio-noetic changes. 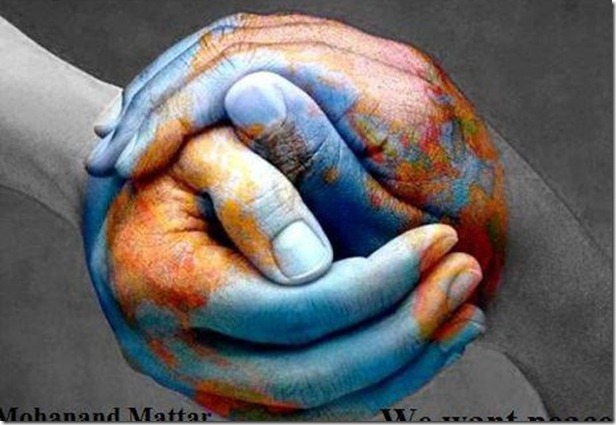 For, contrary to what many believe, the evidence from the experiential modalities involving the perinatal, and my own experience, concludes that the dangers of not accessing the perinatal unconscious are much greater than the ones of attempting to access them. For our residual birth issues influence us one way or the other. If we deny them, we can be deluded into acting them out, completely unconsciously, without an insight or a clue, in a “fetal trance state,” in the form of war, social violence, spouse abuse, sexual promiscuity resulting in the contraction of AIDS, and a myriad of other destructive and self-destructive ways.

Whereas if we turn to face this supposed “monster,” with only a tad of insight into these forces that direct our life, we are at least able to avoid the

most horrific of the destructive acts that keeping it unconscious can cause us to participate in.

And then, on the more positive side, fully working through these seemingly hellish inner traumas can result in a transformation of the person and a lightness, peace, beauty, and fulfillment of life unlike anything that can be imagined beforehand.

A Race Against Time

Regardless of whether we succeed, we must try. As Stanislav Grof put it in his conclusion to an article on this global crisis: For our very survival,

We seem to be involved in a race for time that has no precedent in the entire history of humanity. What is at stake is nothing less than the future of life on this planet. If we continue the old strategies, which in their consequences are extremely destructive and self-destructive, it is unlikely that the human species will survive. However if a sufficient number of people undergoes a process of deep inner transformation; we might reach a level of consciousness evolution that will bring us to the point of deserving the name given to our species, Home sapiens, i.e., wise humans. [Footnote 3]

“The Leaven In the Dough”

Of course, I do not expect that the sort of application of experiential techniques Grof hopes for above can occur on the massive scale that would seem to be necessary to avoid apocalypse in the short period of time that we have left. Yet it might be that we would be lucky enough for that not to be necessary.

It is possible that simply a significant fraction of the world’s population—like the “leaven in the dough”—can make all the difference in the world, literally, by tipping our course one way as opposed to another, especially if these people—because of their healing and their awareness of the crisis—are motivated to place themselves in positions of influence and education, or to put their efforts toward healing, on individual and collective levels, in larger numbers than the average populace would. In other words, not just the leaven in the dough but as persons, standing in the right place and with the lever big enough, who can move the world. 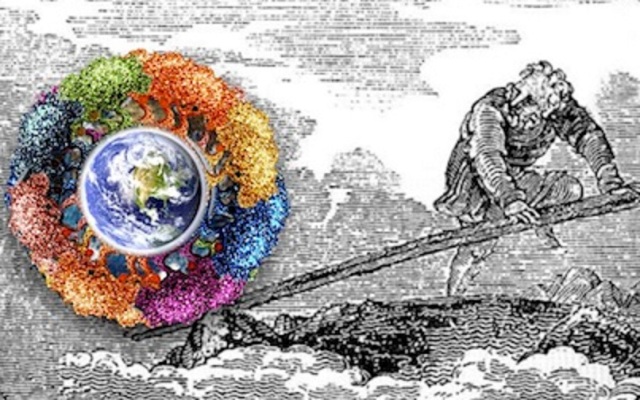 Continue with Apocalypse–No! Afterword: Centaurs, Shamans, Sacrificial Lambs, and Scapegoats: Reflections on a Collective Shadow and Experience as Primary

1. See “Some Cosmic Encouragement: I Was Told “Once There Lived ‘Noble’ Beings” and Now Is the Time for a Regeneration of Peoples to Regain What We Lost,” which is the prologue of the book that follows in line from this one. Wounded Deer and Centaurs expands and elaborates on some of the central concepts introduced here.

Continue with Apocalypse–No! Afterword: Centaurs, Shamans, Sacrificial Lambs, and Scapegoats: Reflections on a Collective Shadow and Experience as Primary

To Read the Entire Book … on-line, free at this time … of which this is one chapter, Go to Apocalypse No: Apocalypse or Earth Rebirth