C’mon, c’mon, a little bit of rationality, folks! But however inconsistent with common sense these insinuations and outright assertions from the media, when you have something that’s repeated over and over again, mantram-like…man! Especially if you’re in a confused state, or a stressed state…it’s gonna be the only thing you can think of when you’re coming up with opinions.

These untruths are so firmly woven into the fabric of the Matrix–you’ll see there are others you’ll recognize–that when hearing them you’ll probably say, “Oh, yeah, that’s true.”

That’s what they’ve accomplished. And these nonsensicals are so perfectly knitted into the blanket of that matrix that they’re both mesmerizing and invisible, therefore unchallenged, even by the pundits. They are even, by rational argument, unchallenge-able.

Now, what do I mean by that…”unchallenge-able”? Republicans at a point in my lifetime included in their coordinated daily attacks on clarity a kind of chanting in coordinated fashion. By that I mean they were repeating the same, as they call them now, talking points. I don’t know if you’ve noticed, but remember, if you did tune in for any of Bush’s debates, when he was running for president either time. He’d be asked a question.

And he’d never give an answer to the question.

It would be used like a jumping off point to say what he really wanted to say. It had the intended effect of distracting the viewers from any clear thought on the issue or subject.

It also freed up that time to be used, once viewers were led off track, for the seeding of those now assailable minds. Specifically, Bush was able to use the time allotted for answering questions instead to pound home the talking points Rich-publicans were trying to turn into some new (untrue) “obvious truths” (of course also to reinforce the old ones).

Palin: I’m not going to let the media set me up to answering your questions, I’m going to brainwash you instead!

Oh by the way we had a really good example of that with the Republican vice-presidential candidate last time. I don’t know how many of you have seen it, but Sarah Palin, in the vice-presidential debate, she was so… incredible…in a way…in her brazenness. She’s up there alongside Biden who’s answering questions. And at her turn, she’s saying (paraphrasing) “I’m not going to let you media folk set me up here, so I’m going to talk to the people directly.”

And that’s how it went the whole hour, hour and a half, whatever it was. Whatever the question was, she’d totally ignore it and recite a monologue instead. Well, basically she’s repeating again and again her favorite, most lucrative mantra, her most delicious untruths.

Attacks on our reason…i.e., Republicans to public – “You’re a dumb shit, I’m not going to answer your questions!”

But what if you really wanted to know something? She wouldn’t answer you. So it was also like a one-way conversation.

Here we have politicians, who are always telling us what the truth is, but who will not answer our questions so that we can add our own thinking to the matter. We are prevented from coming to our own conclusions, so also making our own decisions.

Well that’s really an attack on our reason, isn’t it? I mean we can’t ask questions, but you can just tell us what the truth is? And that’s basically what was going on. 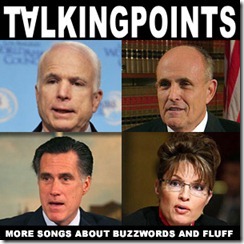 So it is sort of like a coordinated chanting. It doesn’t matter what the issue or topic is, from the gop side you just keep hearing the same phrases about it—phrases intended to replace reason.

It doesn’t either matter which Republican is talking or what TV show they are on, they are repeating the same phrases. Like Sarah Palin, they are using any question, as in a television interview, as a launch point into a rehearsed nicely knit together, truth-sounding, package of untruths. You see this one Republican saying something here, say, then there’s another Republican over there, and if you compare you notice she or he is repeating basically the same thing almost in the exact same words.

And there’s a certain power in something that’s said over and over again in the exact same words. We know this. We’ve seen that power conspicuously in recent times.

We can hear Hitler, in Nazi Germany, repeating the same thing over and over again…and using this rhetorical device in targeting Jews, getting people all riled up and such. On recordings from this era we hear their…”Sieg Heil! Sieg Heil! Sieg Heil!” There’s a certain kind of comfort in not having to think, all you have to do is chant. And you can rely on these chants because everybody’s saying them, so they have the power, of like, wow, they must be true, because, well, everybody’s saying them, everybody around you. Well that’s a sad state of affairs.

So what does this do, this omnipresent repetition of phrases in response to questions? This chanting of untruths instead of having rational discourse, when people are hearing this year after year and even decade after decade, what does it do?

Well, it adds to the smokescreen of confusion and misinformation that was effectively castrating and making Americans easily manipulated to whatever end the Republicans wanted. I mean after all you’re not getting reasoned answers, you’re just getting slogans, and that leaves you confused, especially if it’s combined with a lot of misinformation which challenges the facts on everything, when everything is turned backward and they’re lying about everything.

I’m sure you haven’t forgotten how flagrant that intentional deception was over Bush’s eight years. And isn’t that gonna make you confused? I remember a time when the facts were not so much in dispute so there wasn’t such a huge divide between the Democrats and the Republicans about what the issues were. What was debated could then be what you do about those commonly acknowledged problems.

Continue with Equal Time For Idiots: For “Fair” Reporting, Mix Equal Parts Truth and Lies…. (It’ll be fun seeing if the public can figure it out!)

The Rise and Fall of “Obvious Trut

Here is an audio of the author’s impassioned reading of this part. Though it is of the first, unedited and unpolished version, and it does not contain all the detail of its current form below, it does capture the flavor of it all. I offer it here for your listening pleasure. For the reading of this part, “The Rise and Fall of ‘Obvious Truths,’ Part Two,” click on the link to the audio site above or click the link to the audio player below.

http://cdn.hark.com/swfs/player_fb.swf?pid=dhvsqlbnjl
The Rise and Fall of Obvious Truths, Part 2. by SillyMickel Adzema

Continue with Equal Time For Idiots: For “Fair” Reporting, Mix Equal Parts Truth and Lies…. (It’ll be fun seeing if the public can figure it out!)